Young people in Greece no longer watch the news. At least not often, and they are not ashamed to say it. The general consensus among young Greeks is that the Fourth Estate is no longer trustworthy; it is only used to spread fear so that politicians behind the media corporations can get their way.
Link to Story

[Opinion] Journalism was once described as the Fourth Estate: a watchdog of the elites, informing and protecting the masses. People looked to it for the truth. Today, information is propelled from every direction, medium, and person. Does the power of the Fourth Estate still exist, and if not, how do we reclaim it?
Link to Story

There is a popular saying that “when things don’t go right, go left”. How many times recently have we all thought of turning to another direction? With the increasing difficulty people of all ages today face in finding a job, a different trend is on the rise – that of career nomads, and freelancers. All hoping for a better future. Will you join them?
Link to Story

The biggest problem qualified youth face today appears to be that they are in jobs with out quality con tracts, no job security and no social benefits, and with increasing long-term unemployment, the youth of today risk be coming the unemployable adults of tomorrow. These labour conditions need to change, if we want to keep people in their country, and encourage development.
Link to Story

“Politicians have a tendency to leave all difficult decisions for later,” says Professor of European Integration at the University of Athens and President of the Hellenic Foundation for European and Foreign Policy (ELIAMEP) Loukas Tsoukalis. Now the party is over, says Tsoukalis, but who will pay the bill?
Link to Story

A politician can be an idiot

Since the time of Socrates politicians have not been thought of highly. They are considered dishonest, selfish, arrogant, and immoral. Socrates, himself had said that “I was really too honest a man to be a politician and live”. Charlie Chaplin saw himself as a clown, but even that, according to him, placed him.
Link to Story

The Elegance of Being Eloquent

Many people know how to talk, but few how to speak. It is incredible how much information can be lost by the mere lack of the ability to say it. Indeed, to quote Ben Johnson, “to speak and to speak well, are two things”. Politicians and diplomats are people who today are required more than ever to speak.
Link to Story

IITYWTMWYBMAD?* (or How the Internet created a new language)

The Internet and the ‘connecting people’ technology has taken over our lives to such an extent that now it is impossible to imagine a world without them. But have you ever considered the impact that this new technology has on language? The very onset of the Internet itself sowed the seeds of a chat language that would soon branch out across all spectrums and propagate the already numerous cut-down words.
Link to Story

The Importance of Being Happy

“When I was in school, they asked me what I wanted to be when I grew up. The pursuit of happiness is often thought of as a desperate urge to find something that will fill our lives. That will light up a spark. That will make us feel alive. However, now and again it is good to simply pause that pursuit and simply be happy.
Link to Story
View More Stories

Maria-Christina always had a bug for writing growing inside of her. She could write before she could speak and has been writing ever since.

She graduated with First Class Honours in European Studies and Modern Languages at the University of Manchester, UK, during which she had the opportunity to study for an ERASMUS year in Perugia, Italy. After graduating and gaining first-hand insight into the thrills of a newsroom, she was motivated to further her studies in Communication. She thus obtained a Masters with Distinction in Journalism Studies from Cardiff University, UK.

Since graduating she has worked with various newspapers in Cyprus, Greece and the UK, while she is also a collaborating editor with Huffington Post Greece, Analyst.gr, Enallaktikidrasi.com, European magazine Cafébabel.com, as well as The News Hub.

She is currently working in media affairs, producing reviews and press releases, and writing and editing documents of all sorts for both online and print publication. She is also involved in media monitoring, communication strategies and press events. She freelances as a journalist, writing on anything she finds interesting, and ranging from feature articles to opinion editorials. She has a particular focus on EU affairs and a strong interest in public affairs and international relations. She possesses excellent writing and communication skills, as well as strong computer skills.

A passionate writer and editor, Maria-Christina is involved in every sector of communications and media. She is an avid linguist and also freelances as a translator. She can deal with all sorts of documents, including legal texts from and to Italian. In June 2014, she was named Translator of the Month by Cafébabel.com, and Babelian of the Month in February 2015. One of her short stories has also won first prize in the competition organized by the National Society of Greek Writers in 2014. In 2015 she also published her first book.

Fluent in Greek, English and Italian, she also speaks French, Spanish and German and seeks to learn more.

She has also obtained a professional diploma in Latin and Ballroom dances.

Maria-Christina is energetic, diligent, committed and devoted to the work she undertakes. She is responsible, delivering her work timely and accurately, and can multitask without losing track of details. She has a rich imagination, something that guides her in the stories she produces for her blog, loves to travel and discover new things and is constantly amazed by how little we really know of the world we live in. 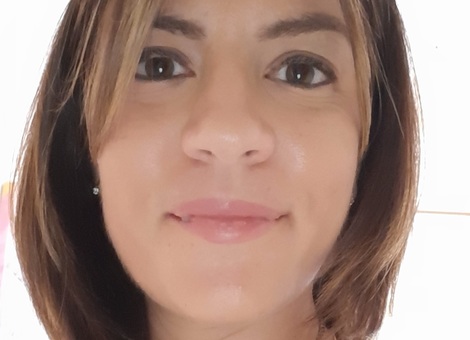